Android Ebooks Coming to a Phone Near You

As of today, Smashwords ebooks are available on Android phones thanks to our new distribution relationship with Aldiko.

If you're not familiar with Android, then you probably don't yet understand why the news above matters. If you're an ebook author, publisher, or reader, and you're looking to sell or discover ebooks, I wrote this post for you. Consider it an "Ebooks for Android" primer.

First, let's start with what you know. Many ebook fans are familiar with the iPhone. The iPhone has become one of the most popular ebook reading platforms, thanks in part to its fantastic touch screen, but also thanks to a proliferation of great e-reading apps such as Stanza, eReader and BookShelf.

These apps, created by independent software developers, add value to the iPhone by letting you do cool things with your phone, like reading ebooks. Smashwords ebooks, for example, are discoverable by more than two million users of Stanza because they're listed in Stanza's native catalog.

Now that Apple has demonstrated the profitability of selling an app-happy computer wrapped in a telephone's clothing, other phone makers are looking to get in on the action. To turn their phones into smart phones, however, they need an operating system.

Rather than build their own operating system, several handset makers have decided to adopt a new mobile operating system standard called Android. Android is one the most promising developments you'll hear about this year in mobile phones.

A little history on Android: A few years back, Google acquired a company by the same name, which was creating an operating system for smart phones. In late 2007, after shepherding the project along, Google and 47 other companies created the Open Handset Alliance, a consortium of phone makers, software developers and other interested companies who wanted to further develop the Android system and make it available as an open standard that all smart phone companies could utilize.

Several million Android phones have already been sold, and by the end of 2009 nearly two dozen new Android-enabled phones will be on the market. Like any other operating system, be it Microsoft Windows or Android, the real value of the operating system is in running applications created by independent software developers, like e-book reading apps.

According to Flurry, a company that helps techies develop their mobile apps, app developers are excited about Android, probably because so many phones are coming out that support Android. Flurry tracks the number of their developers starting new app development projects for different platforms. As you can see in the chart below, the number of new Android projects is growing quickly, while the number of new iPhone projects is declining. These new project starts are an indication of the type of explosion we're likely to see in applications for Android. Bring on the ebook applications! 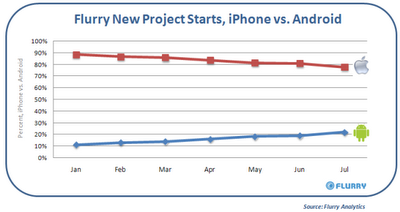 The advantage of developing an Android app is obvious to many developers. By developing, for example, and ebook reading app for Android, the app will work on multiple smart phones from multiple manufacturers. So they can build it once and sell it on any device. Apps developed for the iPhone, by contrast, only work on Apple's devices.

With today's news of our partnership with Aldiko, Smashwords authors, publishers and readers can benefit from any growth in the Android handset market.

If you're a Smashwords author or publisher, and your books are available in our EPUB format, your books are ready for immediate sampling and sale on Aldiko.

If you own an Android phone, with a lot of patience and a little luck you might locate Aldiko at the horribly designed Android Market, which is the official online marketplace for Android apps. The good folks at Aldiko inform me that if you point your Android phone's camera at the bar code below, it'll help you download their app more easily.

<-- Scan this barcode with your Android camera
Posted by Mark Coker at 2:42 PM