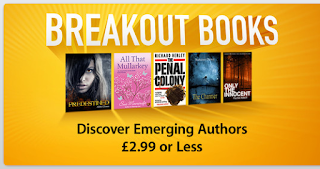 Apple’s U.K. and Ireland iBookstores today elevated self-published ebook authors to the top of the store in the latest example of Apple’s successful Breakout Books merchandising feature.  This week’s Breakout Books feature showcases 55 self-published titles, approximately 40 of which were distributed to Apple by Smashwords.

The Breakout Books feature was first piloted in Apple’s Australia iBookstore in December. The New York Times and The Wall Street Journal covered the US rollout last month. 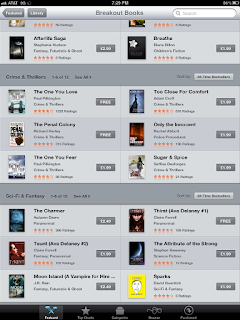 The featured titles are selected by Apple’s merchandising teams in each market, and showcase breakout titles from self-published authors around the world.

The criteria for inclusion is largely customer-driven - selected titles exhibit strong reviews and ratings, and have shown exceptional sales performance.  It means that Smashwords authors who do a great job of wowing readers with their books stand a shot at gaining similar merchandising attention in the future.

To understand the significance of Apple’s Breakout Books feature, it’s helpful to note that such high profile merchandising attention has historically been limited to large, long-established publishers. By placing the Breakout Books feature front and center in the iBookstore, Apple is throwing its tremendous merchandising weight behind the self-published author community, and in the process is helping to level the playing field for all writers.

The increased worldwide merchandising by Apple of self-published ebooks speaks, I think, to the rising importance of indie authors to the future of book publishing and book retailing.  Self-published ebooks satisfy a large and growing segment of the book-buying audience.  These readers appreciate high-quality books at affordable prices.  Most of the featured Smashwords books today are priced around £1.99 (around $2.99 USD), and several of the books featured today are priced at FREE.

Here’s a list of the Smashwords books featured in this promotion, in alphabetical order by title.  If an author blogs about their inclusion in this feature, I'll try to provide a link below their name so readers can visit their blog.

The Breakout Books feature is a permanent, rotating feature updated by Apple over time as new indie books break out.  The feature can be found on the iBookstore at http://iTunes.com/BreakoutBooks. If you're outside the U.K., this will show you the current Breakout Books selection in your local store.

I'm excited to be included, and very thankful that my book was put forward. This is a massive boon for self-published authors, and I credit Apple with making the decision to feature us.

Thank you to all involved, our distributors and retailers are partners in our careers, and it's great to see that some of them stand out in their efforts to make those relationships massively beneficial.

This was a wonderful piece of news to wake up to this morning! I'm flattered to have been selected as a breakout book!

Many thanks to Apple and Smashwords for this, and congratulations to all the other writers!

Thank you Mark, and thank you to Smashwords and Apple for this amazing promotion! I got the email late last night from Mark and my wife couldn't believe that he not only sent the email but replied personally mere minutes after I replied back with my blog post!

This is great news and expected because eBooks are a rapidly growing segment of what is read today. See a related article at: blingbooks.com/shorts/

Nice article and thanks for the list! Congratulations to all of the authors!

Here's a link to my blog, where I link to this post:

Earlier comment deleted because of a problem with link to blog site, but I want to say it again, this was great news and gave us plenty to discuss over breakfast especially in the middle of my first read an eBook week. Fantastic news for all those selected to be in the Breakout, I couldn't be happier for you, congratulations to you all, and to everyone at Smashwords thanks for your part in our personal writing stories. I posted the news on my own blog
http://martyn51.blogspot.co.uk/2013/03/breakout-books.html
and posted a link

Just wanted to drop a quick note and express my thanks to Mark Coker and his staff at Smashwords for doing a fantastic job. My first book appeared in Apple's Breakout Books section and I couldn't be happier!

I have a mention of it on my own blog!

That was nice. What a way to market myself. Didn't even mention my book. LOL!

Bakkian Chronicles, Book I - The Prophecy

It appeared in the Breakout Books section last week and much to my delight, it was my wife who discovered it. Many many thanks again, Smashwords!

Congratulations to all the new authors on the list!

Congratulations to all the authors that made the list. How about doing an article/short pub? on how your book evolved into the selection? This would certainly help the rest of us IMHO.

Nathalie, Apple routinely includes books priced at FREE in these and other promotions. They've always been big supporters of FREE.

If books are picked based on sales, do they choose a free book based on downloads? If so, how many downloads constitutes inclusion in a promotion? I've never seen this mentioned. Just curious.

Nathalie, there's no cut and dry bar. If you're ranking in the top free downloads list, and you're getting reviews of 4.5 stars or more, then you'll probably rise to their attention.