Amazon The Grinch Who Stole Christmas? Amazon Doubles Down on Exclusivity 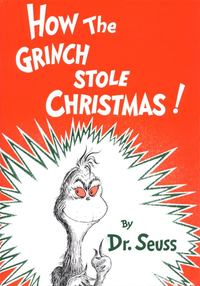 Will Amazon be the grinch who steals Christmas from thousands of indie authors this holiday season?

Last year, a mere three weeks before a record-breaking Christmas for ebook sales at the Apple iBookstore, Barnes & Noble, Kobo, Sony and other retailers, Amazon convinced thousands of indie authors to remove their books from the virtual shelves of all Amazon competitors.

The lure:  KDP Select, an opt-in program that requires authors to make their books exclusive to Amazon for a minimum of three months.  I blogged my opposition to the program here at the Smashwords blog, and in the months since also spoke out against it here, here, here and here.

The controversial program has its share of opponents and supporters.  Some authors have done well with it, and others have not.

I contended, and still contend, that exclusivity is a devil's bargain.  When authors go exclusive with any retailer, they increase their dependence upon that single retailer, limit long-term platform building at other retailers, disappoint fans who shop at other stores, and hobble the development of a thriving and competitive ebook retailing ecosystem.

KDP Select places authors in a difficult position.  They must decide if the short term benefits of KDP Select outweigh the long term harm caused to their writing career.  The potential benefits are uncertain, and the harm is impossible to measure.  How does one measure a missed opportunity?  One thing is for certain:  When I look at the Smashwords bestsellers, they're authors who maintain non-stop, uninterrupted distribution of all their books.  They're the authors who are working to build their audiences at each retailer for the long term.

This Christmas season is shaping up to be another record-breaker for Smashwords authors.  In the last 12 months, sales at the Apple iBookstore have surged as Apple continues to dominate the tablet and smartphone markets, and has built the world's largest global ebook retailing network with stores in 50 countries.  Barnes & Noble has expanded to the U.K. with the support of 2,500 brick and mortar retail storefronts promoting, displaying and selling the NOOK family of e-readers.  Kobo was acquired by Rakuten, a global ecommerce juggernaut, and has aggressively grown its global footprint and sales for the benefit of Smashwords authors.

Amazon's response to the rise of its competitors?  Today, Amazon doubled down on its exclusivity strategy. It sweetened the KDP Select lending library pot with an extra $1.5 million to be paid out over the next three months (press release here).

What affect has KDP Select had on the growth of Smashwords?  Not as much as our detractors might think.  After Amazon announced KDP Select last year, some authors speculated it would put us out of business.  Quite the contrary.  We and our authors have enjoyed another record year this year, thanks to growth across the Smashwords distribution network.  We've enjoyed record profitability, and have grown our staff to 19 professionals, all singularly focused on creating success for the 50,000+ authors, publishers and literary agents we serve. We're reinvesting our profits to provide faster support, improve the speed and reliability of our distribution, and open up new distribution and sales opportunities (I'm writing this post from The Hague, the Netherlands, where I just concluded two days of exciting meetings with representatives of the International Federation of Library Associations). We'll end the year with nearly 100,000 new titles added to the Smashwords catalog.  Last Christmas was a blowout record for us, and I suspect Smashwords authors who remained fully distributed last Christmas and thereafter benefited by the reduced competition when thousands of KDP Select books disappeared from retailer shelves.  I expect this Christmas will be no different.  I expect some of our authors will pull some of all of their books, and the authors who remain fully distributed will become stronger for it.

Amazon is smart to realize that indie authors are the future of publishing.  If they can convince a large percentage of indies to surrender their independence to Amazon, Amazon will enjoy long term competitive advantage.

Indies have a choice to make.  They can support Amazon's strategy, or reject it.  I don't envy the decision many authors must now make.  It's unfortunate Amazon would play indie authors as pawns in its larger battle to harm its retail competitors. I wish the best to all self-published authors, regardless of their decision.

How to Sell Ebooks at the Apple iBookstore

The Apple iBookstore, which last week expanded its global reach to 50 countries, has always been kind to Smashwords authors.  Numerous Smashwords authors have graced Apple's bestseller lists over the last two years, and this week is no different.

Four days ago, R.L. Mathewson uploaded Checkmate to Smashwords.  In under 24 hours, we distributed it to Apple and it went live worldwide in 50 stores.  Yesterday, this contemporary romance hit #1 in Apple's US, Australia, U.K. and Canada stores.  As I write this, it remains #1 at these same stores.

Three days ago, Kirsty Moseley uploaded Always You to Smashwords.  The next day, we distributed it to Apple and it went live worldwide in 50 stores.  Today, Always You is the #7 bestseller in Australia, #20 in the U.S. and #20 in the U.K.

Last week, the US Apple iBookstore ran a special promotion of romance titles priced $1.99 and below.  We suggested they consider Mia Dymond's Playing with Fire, and they included it.

Last week, in conjunction with Apple's iBookstore launch in New Zealand, they named Shayne Parkinson's Sentence of Marriage their "Book of the Week" for both their New Zealand and Australian stores.  Sentence of Marriage is a free series starter.  Shayne's next book in the series, Mud and Gold, priced at $3.99 (NZ dollars), is today the #8 bestseller in the New Zealand store, and #54 in Australia (after the U.S. store, Australia is the next highest earner for Smashwords authors, just edging out the U.K., which is also big for us).  I suggested they consider promoting Shayne because she's one of our bestselling authors at Barnes & Noble.  She's also one of the few authors we distribute to Amazon, where she sells well. I suspected that since she was performing well at our other retailers but hadn't yet broken out at Apple, a dose of pixie dust merchandising love could help launch her to a new audience.  That's what's happening.

The Smashwords authors above aren't the only ones doing well at Apple.  Other notable standouts now in the top 10 store-wide bestsellers include Jillian Holmes, author of Temporary Kiss (#7 in the U.K. iBookstore), Isabelle Rae, author of When Summer Ends (#8 U.K.), S.H. Kolee, author of Love Left Behind (#5 Australia, #10 Canada), and Marie Kelly, author of Billionaire's Revenge (#2 Australia, #8 Canada). 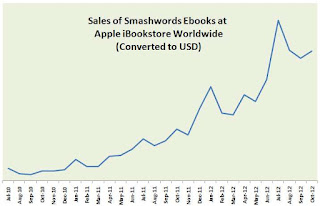 Apple is today the largest retailer for Smashwords authors.  The chart here shows the growth in monthly dollar sales for Smashwords books at Apple.  I omitted the dollar figures, but you get the idea how Apple has grown.  For all its incredible growth in ebooks, Apple is conspicuously mum when it comes to talking about their accomplishments.  Did they do a press release or a press conference on their launch of 18 new stores last week?  I don't think so.  Most authors I meet have no idea Apple is distributing to 50 countries.

I think their low key approach has led many in the industry to underestimate their progress.  My advice to authors:  don't underestimate Apple.  If you're not there, you're missing out.  Every new country they launch represents a new micro-market, an opportunity for you to become a big fish in a small but growing pond. The authors who get out there first and establish footholds today will become the bestsellers of tomorrow.

All the authors mentioned above?  Keep an eye on them.  They're all headed toward the New York Times bestseller list in the months and years to come if they keep up their great work.

Our relationship with Apple started prior to launch of the iPad in early 2010.  I, like the rest of the world, had heard rumors that Apple was preparing to launch a bookstore, so I got on the phone and called their main switchboard.  Within about a week, I met with a senior executive at our office in Los Gatos.

Keep in mind that at the time, Smashwords was only three people.  It was myself, Bill Kendrick our CTO, and Keri McKie our CFO.  He asked me a lot of questions about our business, my background, and how we ran things.  He told us that Apple was looking to form relationships with a small number of authorized ebook aggregators, their term for distributors.  We had already signed distribution deals with Sony, Barnes & Noble and Kobo, so of course we were interested.  He laid out their integration requirements, and told us if we met the deadline and requirements, we were in, and if we didn't, maybe later.  In this industry, "maybe later" can easily mean never because things change so quickly.  We wanted to be in on the ground floor, so we dropped everything and in two weeks completely reworked how we produce .epub files, we performed dozens of other technical enhancements to our platform and processes, and we met the deadline.  We had 2,200 books on the iBookstore on day one.

Today, we supply approximately 125,000 ebook to the Apple iBookstore, and we're one of a small number of global aggregators supplying books under their aggregator program.  To remain in the program, we must undergo (and pass!) rigorous quarterly audits.

As you might imagine, I've got warm feelings for the team at Apple.  They took a gamble on us early on, and that gambled paid off for everyone, especially our authors.  They've shown our authors incredible support over the last two years. They've also been especially proactive in terms of working with us to identify opportunities for them to promote our authors to their customers.

Below I'll share some tips for succeeding at the Apple iBookstore.  90% of these tips apply to every other retailer.  These tips are based on my personal experience, opinions and observations, and are not endorsed by our friends at Apple.