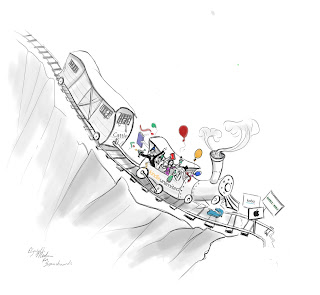 Word came out yesterday afternoon that Oyster is "sunsetting" their business, a polite euphemism for "closing."

I received an update from our friends at Oyster this morning.  Here's the scoop:  Oyster has been acquired by Google.  The Oyster service will continue to operate as normal until sometime in early 2016, at which point it will shut down and cease to exist.

Between now and the ultimate closing (exact date TBD), Smashwords will continue to deliver new books and updates to Oyster, and Oyster will continue their great work generating readers and income for our authors.

What does this mean for Smashwords authors and publishers?  Obviously, it's a sad day when a promising sales outlet such as Oyster exits the market.  Although Oyster and Scribd are among our smaller retailers, they were our fastest growing sales outlets in 2014.  In recent months, their combined sales have been approximately equivalent to what we sell in the Smashwords store each month.  So while we're sad to see Oyster's sales go away, in the short run it's a bump in the road because the lion's share of sales are coming from larger retailers.

Longer term, I'm concerned by the macro implications of this.  With the loss of Oyster, the retailing ecosystem just became less diverse.  Last month indies lost Flipkart in India.  Today, indies are losing another good partner that treated authors well and paid full single-copy retail rates for their books.  Which retailer will fail next?

Some might see this as a game of survival of the fittest where weaker less adaptable players fall by the wayside in favor of stronger players.  Maybe.  Although species extinction is a natural process in any environment, extinctions often signal an increasingly toxic or inhospitable environment for those still struggling to survive.

Let's explore this a little further.  What killed Oyster?  I should preface that what I'm about to share is my personal speculation and opinion, and not based on specific insight from our friends at Oyster.

My take is that despite building a beautiful and elegantly designed app that pleased readers, Oyster was unable to make their business model work.  The cost of their subscriber's consumption exceeded Oyster's revenue from subscriptions. Oyster faced the same headwinds Scribd is facing - namely that romance and possibly other genres were too popular with their subscribers and therefore too expensive to make profitable under the current model.  The solution is you either need to pay authors less, charge readers more (or limit their reading), or something in between.

I'm going to speculate that either Oyster's VC backers or Oyster's controlling shareholders were unwilling to give Oyster the necessary time and funding to iterate their model until they could make it work. Scribd, on the other hand, at the time of their romance purge signaled publicly that they plan to explore tweaks to their model that would allow them to build a sustainable and profitable business for the common benefit of authors/publishers and subscribers.

And then there's the elephant in the room:  Kindle Unlimited, Amazon's subscription service powered by KDP Select.  Unlike Oyster and Scribd which pay Smashwords authors and publishers full agency rates for qualified reads (after the reader reads more than about 10% of the book, it triggers a sale), Kindle Unlimited pays authors by the page, and at a rate that typically works out to only a fraction of the 70% list KDP authors get for single-copy sales.

The Kindle Unlimited pay rate is entirely decided by Amazon.  The book's list price is irrelevant to Amazon's calculation.

This means Kindle Unlimited books cost Amazon less money than what Oyster and Scribd want to pay authors and publishers, which means Kindle Unlimited can provide readers more reading at less cost to Amazon and to the reader.  How can Oyster, Scribd or any bookseller compete when Amazon can pick the pockets of authors and give the savings to readers?

This works great for Amazon and its customers, but not so well for authors.  Kindle Unlimited devalues books by making even 99 cent single-copy purchases look expensive when the same book can be read for free under Kindle Unlimited or Amazon Prime. 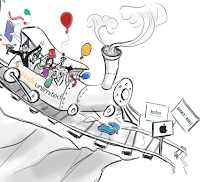 KDP Select and its Kindle Unlimited is an out of control train.

Inside first class a raucous and extravagant party is underway. It's filled with hundreds of thousands of indie authors who've offered up over one million books enrolled exclusively in KDP Select. Everyone's partying like it's 1999 because in exchange for making their books exclusive to Amazon, these authors are given preferential access to Kindle customers.

Authors and publishers who refuse to make their books exclusive to Amazon are on the train too.  They don't sell as well as the first class passengers.

That's them in steerage. They're in the cattle car at the back. These folks' books don't have preferential discovery, which means Amazon makes their books less discoverable and less desirable to readers. These are the authors and publishers who are trying to support a diverse ecosystem of multiple retailing options.  But the world's largest ebook retailer is deliberately directing their readers to Amazon-exclusive books.

Indies have the power to stop KDP Select in its tracks before it runs the entire publishing industry off a cliff.  Will they?