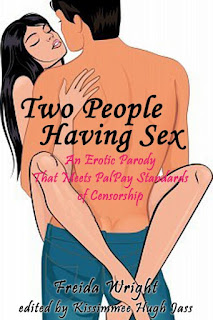 Talk of censorship tends to put a frown on everyone's face.

Today, we're going to put a smile on your face, erotica style.

The amazing duo of Jen Ashton and Ren Cummins, writing under the nom de plume of Freida Wright, have penned a delightful parody of the PayPal/Smashwords censorship saga that would make Jon Stewart and Stephen Colbert blush with pride.

With their generous permission, I bring you their masterpiece here in its entirety, for FREE.

Great satire helps us view important issues in a new light. Just as the political satire of Stewart and Colbert brilliantly illuminate insights inaccessible through mainstream media, Ashton and Cummins expose the inanity of censorship.

If you've been following my email updates to Smashwords authors, publishers and customers regarding the PayPal censorship saga, you'll appreciate this parody even more. I trust even our friends at PayPal will enjoy a friendly chuckle.

Ashton and Cummins have given readers permission to reprint their story anywhere online provided it's reproduce it in its entirety with the links intact. This is a story worth sharing, so please do your part to sprinkle its pixie dust far and wide.

Parental notice: Since this is an erotica parody, it contains language and situations not suitable for children. Enjoy!

Greetings:
The thought of censorship for an author is no doubt disturbing in a “free” society. However, just like yelling “fire” in a crowded theater as a joke is dangerous to that group of people, so is the continual advancement of the sexual revolution dangerous to society by the loss of dignity to the human person implied when people become regarded simply as objects. Like it or not, healthy, thriving civilizations need certain boundaries as do children. Take them away and a downward spiral begins; bad things happen. Regarding PayPal’s rules, they are too late to stop our downward decline as a civilization…but I cannot in good conscience oppose them.

Wonderful way to make a point. Let's go after PayPal for--what was the word they used for fucking books? or authors? or Smashwords? or my bank account?

Still, as Mr. Maurer says, it is a difficult situation.

Erotica has been around in one form or another for hundreds of years. The Marquis de Sade is now considered a classic but would apparently violate the rules of Paypal. These books are widely available on other websites who do not use Paypal yet surely, the same backers would also be backing the credit cards used there? I am at a loss to understand how this is anything but outright censorship. What comes next? Violence? Bloodshed? How many other books will be struck from the list simply because someone objects. The books have not caused the decline of civilisation - neither has the sexual revolution. Oh! I loved the parody!!

I sit here smiling like a Cheshire Cat...this is a masterpiece of pure satisfaction. Recompense to those who could or would ever decide for us. I will continue to do what I can...some things are just too important. Sometimes you must make a stand!!! Thank u to the writers!!! :) Leslie Stockton

Love it! And although I agree that people should not be viewed as objects, it is not erotica that causes it. It is not hardcore porn either. You can argue that they contribute to desensitizing people but the reason why people seek it out is because of something else that was present before hand. The government should stop hurtful behaviors when they occur, not when they are strictly fantasies in someone's head. Many women fantasize about being raped, that does not make it remotely ok to rape them. The very fact that they are in complete control of the fantasy negates the negative aspects of a rape. It is not a rape because it was in their heads and under complete control of their desires. Something you will find no rape victim can say.

I would much rather someone read a book about rape or bestiality than act it out. Cutting off these outlets does not stop them, it just drives it underground.

As an adult I should be able to indulge in whatever reading material I want. I can be green with tentacles in my sexual fantasies if I want, I do not want anyone, particularly my credit card company, telling me I am not allowed.

If they are truly so concerned about sexual moral behavior why not invest the money they receive from these sales in women's groups and child advocacy groups that work towards promoting a healthy self esteem that knows right from wrong, fantasy from reality, and a world where violence against women and children is not accepted.

Sorry for the rant, but banning something is a cheap solution that solves nothing but allows you to pretend you did something to eradicate risk, rather than seeing it as what it is. Bullshit.