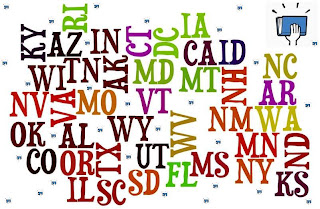 Have you ever wondered where the most voracious ebook readers live? Probably not.

It's a fun question, though, and for the first time ever I present the data to you.

I set out to determine which states ebook buyers live in, and then I wanted to know how the states stack up against one another.

The numbers are surprising, especially when you look at per capita consumption.

Here's how I pulled together the numbers below. Smashwords distributes over 20,000 ebooks to Barnes & Noble. They report to us a breakdown of sales by state. I summed up all Smashwords sales, broken down by state, from Barnes & Noble for the three month period of December, 2010 through February, 2011. Next, I divided each state's sales by the sum of the total to determine the percentage of all ebooks sales from each state. Then I added US population data from the latest US census. Next, I determined what percent of the US population lives in each state. Finally, to determine the how states rank against each other on ebook sales, I normalized the data on a per capita basis. I did this by dividing each state's percentage of overall sales they represent by the percentage of the US population they represent. Dizzy yet? This gave me the final, coolest numbers of them all, a normalized measure of per capita ebook consumption for each state.

So here's the first set of data, where I look at which states generate the highest (and lowest) overall sales. Obviously, the states with the largest populations are likely to purchase the most ebooks.

Now here's where it gets really interesting. Let's look at per capita consumption. Take a look at the Ebook Per Capita Sales Ratio column. This is how each state stacks up against the others, adjusted for population. Alaska, which ranks #47 in terms of overall population, ranks #1 for per capita ebook purchases measured by dollar volume. With a score of 2.92, this means they purchase 292% of the per capita than the average state, or almost triple the national average. A score of 100% means average, 200% means double the average, etc. So as you see, Alaska, North Dakota and Utah round out the top three, and Mississippi, California and the District of Columbia round out the bottom three. My home state of California, really?

A good statistician (and I don't claim to be one - I earned a D+ in statistics at UC Berkeley, and after retaking the class I earned a B-, nothing to brag about so I won't), I should poke some holes in my data. This data only looks at sales through Barnes & Noble. It doesn't take into account the geographic distribution of B&N's physical stores (this might impact where they've sold nooks, which would then impact customer counts). It doesn't take into consideration B&N's market share in each state. It doesn't take into consideration the age, sex, per capita income levels or language breakdowns of each state's population, or the penetration of broadband or dial-up access. I don't disclose the total number of books represented by these three months of sales, or the aggregate sales value, or the average price per book, or the category of book sold. We're a private company, so we don't disclose these numbers (though I can tell you it's a statistically significant number).

I published my raw data online over at the Smashwords Slideshare channel. I invite the true statisticians among you to download my numbers as a starting point for further number crunching. For example, the US Census Data page, where I gathered the population data, has other interesting data sets you can throw against my data, such as median household income, age of population (under 18, over 65), college education, home ownership rates, etc., so I encourage others to mine the data for more meaning. All I ask is that you reference Smashwords as the source of the data and link back to the blog (oh, and please encourage your favorite authors to publish and distribute with Smashwords! Okay, that's optional). Also email me links to your analysis and I'll link to it below so others can enjoy your findings.


Graphic partially produced at Wordle.
Posted by Mark Coker at 11:34 AM

A quick glance at the "per capita" tables shows something that didn't surprise me: cold-weather states (Alaska, North Dakota, Utah, etc.) proportionally buy more e-books, which makes sense. It's easier to download and read an e-book without getting out from under the covers and braving the snow and icy roads to drive to a bookstore (especially in the wintertime, when your sample was taken). On the other hand, warm-weather states like California and Hawaii aren't skewed as heavily toward e-books yet.

P.S.: Thanks for sharing the numbers!

It's interesting to note that these results are very similar to what I saw a few years ago when I first released audio versions of my books at podiobooks.com. Texas, California and New York leading the way in raw numbers of listeners then, and in readers now ...

Great Mark. The great thing about the e-book market is it doesn't matter where you live, as long as you have access to the internet. Thank you cyberspace.

Agree with the comment about cold-weather states being more heavily weighted, especially given the data is from winter. It would be interesting to see another set of data from, say, June-July-August.

That is very interesting, I wonder what it looks like when based on country?

Wow. I never would have guessed in a decade that Texas would be at the top of that list. I really appreciated reading this list ... fascinating.

I'd also be interested in seeing the statistics by country. (Glad that Gregory House mentioned it.)

I like the idea of doing this again in the summer.

For Europe, here's some raw data from our Apple sales. They operate separate iBookstores in the US, Canada, UK, France and Germany (lumped into "Eurozone") and Australia.

Here's the percentage of sales for the month of January.

Nearly all of the same caveats I mentioned for the B&N data apply here, and possibly more: It's only one retailer, it's dependent upon penetration of iPad/iPhone/iPod Touch devices, Apple has less ebook store competition in Australia than in the US. One interesting conclusion is that at a little over 1/4 the US number, Australia has a population of 21,874,900 vs. 307 million in the US. This means the US's population is about 15 times larger, yet the ebook sales here are only about 4x larger.

Another interesting conclusion. The rest of the world is about equal in terms of sales as the US (we've had months where the US was the minority). As Apple opens more int'l stores, we'll see the US decline in importance from an overall percentage basis, even though it will remain a large and growing market.

For some of us it doesn't matter what state we live in or what our current weather is at the moment - we're just readers. I read as much now living in WA as I did as a teen living in AZ. Cold or heat, it doesn't matter, I'm gonna be readin'. But it is nice to know what areas I should be writing most for - polar bears or city dwellers. Hmmm...food for thought.

California, how you have disappointed me! *shakes head sadly* But I can very much understand that if I were in Alaska, anything that would save me a trip to the bookstore would be a godsend. Whereas, really, how hard it is it to toss that paperback into your beach bag? Do I even WANT to take my kindle to the beach, where sand and sea and seagulls might gum it up?

Fascinating... would be interesting to compare e-book sales to traditional book sales by region.

*sigh* I don't think it's the cold weather that prevent people from venturing outside to buy books. I'm pretty sure they venture outside to buy everything else they need. (Speaking from experience living in a winter city.) It's more likely a case of smaller population cities not having the large bookstores with huge selections.

Great post Mark, very interesting. The per capita breakdown appears to show e-book usage high within states likely to have the least amount of Barnes & Noble stores, or bookstores in general, among the communities--most of the states high on the per capita chart are rural states with scattered population. Someone would have to crunch your data against B&N store locations or per capita bookstore rates to find if this holds statistically. Nevertheless, the results you show are somewhat surprising.

Do you have breakdown of genre sales? Be interesting to see which one is tops and which one is bottom both by volume and by money. Leave the free books out since people will grab free stuff even if they don't read it. What are people paying for? That is what I would like to know.

It’s not so much cold weather as lack of bookstores to buy from, I think. I wouldn’t be surprised if it were shown that per capital Alaskans also buy more electronics, clothes and household goods in general online, as well as books. An ebook is particularly adaptable to being distributed to geographically isolated locations as you don’t even have to worry about the postman. Certainly I find that since moving to Australia the only feasible way of getting hold of a book is either through the library or downloading an ebook. Books in their physical format are hard to get and extortionate.

What one REALLY needs to know is where and how to market them. While the Alaskans may be busy little beavers reading away there, there aren’t that many of them so you still might have better monetary success advertising in Texas.

DonOmite, I'll probably do a future post on that. Our top categories across most retailers are romance, fantasy, sci-fi, paranormal, mystery, thrillers. Romance is usually #1. Things vary from retailer to retailer. At Apple in January, for example, the #3 category was motivation & inspirational. When I do a future analysis, I'll analyze these for their "per capita" equivalent in terms of the number of titles we're distributing for each.

Another thought: segmenting by genre. Allromance just posted the state breakdown of customers who purchase their romance fiction ebooks; results similar to Smashwords, CA and TX the top states:

Apparently Alaskans have other ways to keep warm.

Full breakdown of the most romantic states:

There is a lot more to this data than meets the eye. It would not be unusual for Alaska and Texas, which hold a large number of residents that lean toward ideals more identified with the Tea Party, to download works that reflect their interpretation of political opinion. Also they would be more inclined to read books that contained specific religious content. Somewhat similar to conservatives hanging on the radio, listening to the popular words of their favorite conservative commentator. Therefore the data is likely to be highly skewed toward excessive downloads by political and religious zealots.

@Chula, I wouldn't jump to that conclusion. Political and religious books are way down the list in terms of what's selling. They're completely swamped by mainstream fiction such as romance, mysteries, thrillers and suspense. It would be interesting for us to one day examine if there are geographic differences in taste.

A-HA! I was wondering how I could prove that using a Geographical specific location in the book cover or title would "draw". Now all I need to do is find where my books are going by state.

You should have gotten an A in Statistics. Nice job!