The popular (and sold out) San Francisco Writers Conference kicks off next week.

Dan Poynter and I are sitting on a panel titled, "THE EBOOK REVOLUTION: How eReaders are Transforming Publishing." The panels starts at 9:00am on Saturday, February 13, and is moderated by literary agent Ted Weinstein. If you're attending the conference, stop by and say hi!

I'm looking forward to working with Dan again. Last May at the IBPA's Publishing University in New York, Dan and I co-presented the P-Books to E-Books Session (click here to view the slides on Slideshare).

Dan's a true friend and mentor to indie authors and publishers everywhere, and paved the road for many of us. His best-selling book, Dan Poynter's Self-Publishing Manual, has helped thousands of authors raise their game and become professional publishers. The book was my first exposure to the world of self-publishing in 2002, three years before I started writing the business plan for Smashwords.

Check out my exclusive interview with Dan Poynter, which appeared on the Smashwords blog one year ago. Despite the dramatic changes in publishing in the last year, Dan's advice reads like divine prophecy. The interview is as current today as it was then. 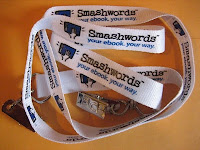 Smashwords is an official sponsor of the San Francisco Writers Conference.

Each SFWC attendee will get to wear our super-cool Smashwords lanyard around their neck. We're also sponsoring, for the second year in a row, the lanyard at the O'Reilly Tools of Change conference that kicks off February 22 in New York.
Posted by Mark Coker at 12:14 PM

Dan looks good. His book was the first book on self-publishing I ever read. I wrote a slightly critical review of his second self-publishing book-- I felt it was outdated and I said so.

But I have to admit he's one of my heroes, even if he would rather throw a tomato at me.

Looks like a great topic! Wish I could be there. I just got a Kindle for Christmas and I enjoy the ebook reading experience a lot!