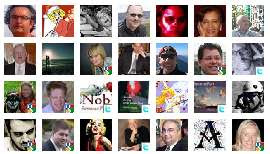 For fun, I thought I'd do some bloggy naval gazing and share some Smashwords blog stats drawn from Feedburner, the cool Google-owned service that makes it easy for bloggers to understand readership trends.

I started this blog in April 2008, one month before Smashwords officially launched.

It's fair to say nobody cared. By January 1, 2009 (noted by the red splotch), the blog had grown its RSS subscriber rolls to a whopping 20 readers.

I suppose it was a bit like the situation some of us feel when we realize our most loyal readers have whiskers and tails and are really just waiting to have their heads scratched.

For some reason, people started paying attention in 2009. We're now up to about 500 subscribers. That's seems like a lot to me. For those of you who stop by for a read every now and then, I appreciate your time and I thank you for your enlightening comments and feedback. I learn from you.

2009 promises to be an exiting year. I'll continue to share items here I think are of interest to the Smashwords author/publisher/reader/partner community. Happy new year!
Posted by Mark Coker at 9:26 PM

Email ThisBlogThis!Share to TwitterShare to FacebookShare to Pinterest
Labels: smashwords

I know that dozens of faithful bloggers have linked to your blog since then, and now you have a loyal following, which is just going to grow, just like your Smashwords.

It just takes time to get the word out. The "long tail" applies to bloggers, too.

I'm glad to see Smashwords is doing so well.

Yeah, Mark, your blog posts back in April sounded kinda crazy at the time. But when I read them now, you sound like a prophet!

I had hoped you were right all along. That's why I signed up with Smashwords. But I didn't honestly believe the publishing world would change this fast.

Keep up the great work!

Thanks Christy and Robert! It's going to be an exciting year for all all of us.

That growth is almost exponential - next year your blog audience should be somewhere in the tens of thousands!

I hope it is - best of luck for the tenties!