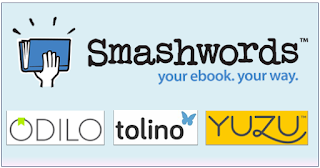 Smashwords today announced three new partners that further expand the reach of the Smashwords ebook distribution network in the US, Europe and South America.

The new agreements with Odilo, Tolino and Yuzu span three continents and will allow over 300,000 Smashwords titles to reach new readers at retail, in higher education and at public libraries.

Here are details for each the three agreements:

Odilo is a leading ebook supplier to over 2,100 public libraries in 43 countries across Europe (1,000 libraries), Latin America (1,000 libraries) and North America (100 libraries). In October, they announced a deal with the ministry of culture in Spain to provide ebook services to over 15 million library card holders in Spain. The company is also running preliminary pilots to expand into Australia and New Zealand.  About 40% of Odilo's ebook sales are books in English, 40% Spanish, 15% French and 5% German.  Odilo's Smashwords catalog will exclude erotica.  With the addition of over 200,000 titles from Smashwords, Odilo's offering to public libraries will grow to over one million titles.  Smashwords authors and publishers will earn 45% list from Odilo sales, the same as from Smashwords library aggregators OverDrive and Baker & Taylor Axis 360.  The Odilo announcement follows Smashwords' announcement of a library distribution relationship with Gardners' Askews & Holts library service in October.  Similar to Gardners, but unlike OverDrive, Odilo will support FREE as a price at which libraries can acquire certain Smashwords books.  At Smashwords, authors and publishers set the price of their books, and many have used the Smashwords Pricing Manager feature to provide libraries lower pricing, including pricing books at free for libraries that ordinarily carry a price at retail.  Learn more about Odilo at http://www.odilo.es/

Tolino powers the ebook stores of several of Germany's largest ebook retailers including Thalia, Welbild, Hugendubel, Der Club, Buch.de, Bücher.de, and eBook.de, among others.  It's estimated that Amazon is the largest ebook seller in Germany, followed by the Tolino network of retailers, followed by other players such as iBooks, Google Play and Kobo which are estimated to be smaller in Germany.  With the addition of Tolino, Smashwords authors and publishers now reach the German market with Tolino, iBooks and Kobo.  Tolino markets its own dedicated Tolino-branded e-reading device through the brick and mortar stores of its retail partners, which tether the retailer's ebook store to the device.   Learn more about Tolino at https://www.tolino-media.de/home

Yuzu® is the digital education platform and retailer operated by Barnes & Noble College, which operates 743 college bookstores serving 5 million college students and faculty members.  The agreement will make it easier for a wide range of Smashwords Premium Catalog books to be assigned for classroom use by educators.  Students can also purchase Smashwords titles for their own enjoyment outside of the classroom in the Yuzu eBook store.  I'm optimistic about the long term possibilities of the relationship.  The higher education market has been slow to adopt self-publishing, but I think this is bound to change over time as an ever-greater number of educators around the world begin self-publishing their original learning materials as digital books.  Many college instructors have already developed proprietary methods, lesson plans and teaching guides that could easily be transformed into low-cost ebooks for the benefit of students and instructors around the world.  Learn more about Yuzu at https://yuzu.com

Smashwords books will begin appearing on these new partners' platforms during the first quarter of 2016.

Initial shipments to these partners will begin in early January.  Smashwords authors who wish to opt out of any of these channels (not recommended!) may do so in their Dashboard's Channel Manager.  Authors and publishers who have chosen to proactively opt out of new channels will not be able to reach these new partners unless they visit their Channel Manager and manually opt in. All other Smashwords authors and publishers will receive automatic distribution of their Premium Catalog titles to these new platforms, with the exception of erotica titles which are excluded from the the Odilo channel.

Looks like you are always looking for new markets for our books. Thank you.

Good news, Mark! Thanks for the new opportunities.

Good to know the reach expands... I think smashwords has so much to offer! Thank you :)

Awesome! Another good reason to stick with Smashwords. Thank you, Mark.

Excellent news and another three reasons not to put all your eggs in the Amazon basket. :)

Great news! Thanks for working so hard to gain us more exposure.

Congrats, Smashwords team! I am so happy to see this new distribution. Whooo-ooo!

I've been looking into Tolino and wanted to get our books listed there, but now you've made it much easier. Thank you from everyone at Imajin Books.

That's good news! I like to hear to find my books at thalia. That is a big step forward. Thank you, Mark!

All the best, Volker (godnzen) Publisher at smashwords.com

Thanks very much for all your hard work, Smashwords! You rock! :-)

Great news. I reblogged this manually on my page: http://dianetibert.com/2015/12/16/distribution-news-from-smashwords/

We have high hopes for 2016. Thank you Smashwords for giving us this unmatched platform.

Keep up the good work!

You may find of interest
http://www.bloomberg.com/news/articles/2016-03-07/how-apple-and-big-publishers-pushed-e-books-toward-failure