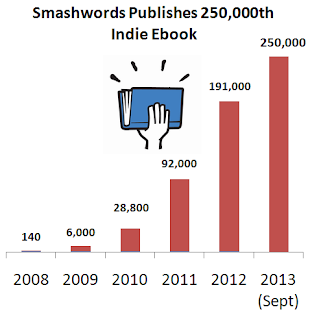 An indie author today released the 250,000th book on Smashwords.

The 250,000 books comprise 8.5 billion words.  Imagine the millions of hours of love that went into these books.  Imagine the cultural treasures that are now available and discoverable to future generations.

Writers have learned that with ebook self-publishing, they can enjoy faster time-to-market, greater creative control and 4-5 times higher royalty percentages.  The higher royalty rate enables indie authors to price lower while still earning more per ebook sold.  This gives indies a significant competitive advantage over traditionally published authors.  When readers are given the choice between two books of equal quality, and one is $3.99 and the other is $12.99, the $3.99 title is more desirable.  The $3.99 indie earns about $2.50 for every book sold, whereas the $12.99 author earns $1.60 to $2.25.

Based on our survey data, a $3.99 ebook will sell over four times as many copies as a book priced over $10.00.  This pricing power gives indies a tremendous platform-building advantage.  Authors who reach the most readers today will have the largest fan bases ten years from now.

The advantages indie authors enjoy in the marketplace are real, and these advantages will increase in the years ahead as reader eyeballs transition from paper to screens, and as brick and mortar bookstores continue their steady decline.

I wonder if the traditional publishing industry has yet come to terms with the ramifications of the rise of indie authorship.

Five years and 250,000 books in, I still feel like we're just getting started at Smashwords.  Wait until we reach 500,000 books, or one million.  Our amazing authors have barely scratched the surface of what's possible. Watch, you'll see.
Posted by Mark Coker at 6:36 PM

I was happy to have the opportunity to load my books up this year. So far this quarter I've been getting a lot of sales on the distributor sites, which I wouldn't be getting without Smashwords. Thanks!

As a reader I want to thank you for the opportunity that you have given indie authors. Without Smashwords I might never have "met" JD Nixon, the best writer ever, or the many other great indie authors I now follow.

Dang. I was two days too early with my latest release! ;)

It was weird at first when the music went off and the balloons and confetti started falling in the office. Then Mark walked in with a big check and film crew and it all made sense. 250,000! Big number, hard to get your head around. Thank you again to Smashwords for everything you've done. So happy to be an indie author!

Thank you Mark Coker and team. Without you, my query letter would have been deleted and ignored in some overworked literary agent's Inbox. Now my books (and dreams) are a reality. You are the best at supporting us writers!

Thank you Mark Coker for always putting us writers first, without you I would have never published my first book. congratulations on your 250,000th published book, you have made so many authors dreams come true..

Congrats Mark! :) I thank you and your team for creating Smashwords. You have help revolutionize publishing for the better, and I'm not looking back.

Thanks Mark and the Smashwords team for giving us all the opportunity, and for the continual encouragement and tips, you have made dreams come true!

Wow! Thanks so much to all at Smashwords for all their hard work that allows us to publish so easily. :) That has helped contribute to the change in people's attitudes!

I value Smashwords as a publishing partner! Thanks for all that you do. You are helping to level the playing field for independents -- and helping our voices be heard.

I've been with Smashwords over two years and I feel really good about what you're doing with the company, Mark.

You all are awesome. Thanks so much for your support. Billie, thanks for stopping by, and thanks for your support of JD and the other authors you've discovered through Smashwords. It's not often we get readers here because my posts are typically author-centric, so it's great to hear your perspective.

I love all the books I get from Smashwords. Great site and lots of great authors. I am a reader so this is one of my favorite sites.. Thanks for having it and congrats on the 250,000th book.. Big deal for sure. :)

Can't wait to get all of my books loaded up this month! This place has a great online community!

It's most excellent that nobody can review a book if they don't pay for it, bloody brilliant! If you don't want bad reviews just make sure you charge something for your golden prose, poetry or other whatever. If your sample sucks nobody's gonna PAY to read the rest of it or place a review.