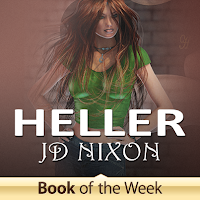 Heller, book one of her fun and amazing mystery and detective series by the same name, was named Book of the Week this week by the Apple's iBookstores in the US and Canada.

The free series-starter is receiving heavy promotion on the iBookstore's home page.  As of this writing, 12 hours into the promotion, it's already charting as the #1 most-downloaded mystery and detective title in both the US and Canada.

This is what Apple says about Heller in its Editors' Notes:


Each week, we select a great book and bring it to you, for free, as our Book of the Week.  Sexy, suspenseful, and delightfully snarky, this romantic thriller set in Australia follows Tilly, a young woman whose risky new job comes with an even riskier boss: a demanding, drop-dead-handsome security expert with a wicket protective streak.  Heller is the first novel in an ongoing series.  Its blend of deftly written prose, color characters, and a fast-paced plot make for a sassy story of danger Down Under that'll leave you breathless.

Last week, Heller was featured as Book of the Week in Apple's iBookstores in Australia and New Zealand.

To give you a sense of the power of such a free promotional feature when combined with a super-awesome series that wows readers, as of yesterday, almost a week after her Book of the Week promotion ended in Australia, JD's six priced titles held six of the seven bestseller spots in Apple's Australia iBookstore in the crime and thrillers category.

JD first published Heller at Smashwords on May 30, 2011, and distributes via Smashwords to Apple, Amazon, Barnes & Noble, Kobo and Sony.  In the last two years, she has continued to write and release new titles in the Heller series and build a global fan base. In 2011, she also launched her Blood Ties series, which now comprises three titles.

Book 5 in the Heller series, Heller's Decision, is available for preorder at Apple with a release date of August 13, 2013.  Order it now at Apple!

If you're viewing this blog post from your iPhone or iPad and you have the iBooks app installed, or if you have iTunes installed on your computer, click here to view how Apple is merchandising the feature.

Congrats JD, and thanks to the entire worldwide merchandising team at Apple for their incredible support of Smashwords authors!

Mark, thanks so much for all the hard work you do on behalf of Smashwords' authors every single day!

Congratulations, JD! Great to see this.

I think all of the covers for these books look great, JD.

Many people try to put images like yours onto covers, but few can pull it off. I think you've done a stand up job of it!