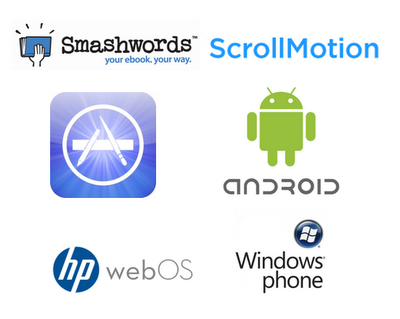 Smashwords books are coming to an app store near you.

Today we announced an agreement with ScrollMotion that will transform over 33,000 Smashwords Premium Catalog ebooks into individual mobile apps for distribution to the largest app marketplaces for smart phones, tablets and other mobile devices.

The relationship will gain Smashwords authors and publishers free entry into the app marketplaces for Apple, Android, Windows Phone 7 and WebOS.

Our partnership with ScrollMotion expands the distribution of our books to the largest, fastest growing app marketplaces, and will enable Smashwords authors and publishers to reach new readers.

According to Gartner Group, worldwide smartphone sales will reach 468 million units in 2011, a 57.7 percent increase from 2010. Apple, Android and Windows Phone 7 above power 63 percent of all smart phones in 2011, and this will rise to 85 percent by 2015. Separately, in the all-important tablet market, which Gartner estimates will reach 69 million devices this year, Gartner predicts Apple, Android, WebOS will collectively power over 92 percent of tablets sold. Gartner estimates sales of tablets will grow to 294 million units by 2015, of which Apple, Android and WebOS are expected to command a collective 89 percent market share.

Over 47,000 books are published at Smashwords today, with over 5,000 new releases in the last 30 days. Over 34,000 of these titles have been accepted into the Smashwords Premium Catalog for distribution to major retailers.

Shipments to ScrollMotion will commence on Friday, and titles will begin appearing in the app marketplaces later this month. All Premium Catalog books are automatically opted in for ScrollMotion distribution. To modify distribution preferences, log in to your Smashwords Dashboard's Channel Manager. Like all Smashwords retail relationships, authors and publishers will earn 60 percent of the list price.

Great news, Mark! Another reason no to worry about creating a specific book app and just sell through all the major players.

That is wonderful news! Thank you, Smashwords and Mark, for working so hard to increase distribution. :)

What a great surprise. Movers like you, Mark, keep the ebook platform a mainstay.

This is great news, Mark. Keep up the good work! :)

That's great news. I'm new to Smashwords - and announcements like this make me really glad I joined! Good luck :o)

I love working within the publishing industry now that innovators like Mark Coker are putting the power back in the hands of creative people.

Not everyone is writing novels. I'd appreciate a post about the formatting options available with these apps. What can it handle other than standard paragraph text?

You never cease to offer us delightful surprises, Mr. Coker.

I think e-book apps are a great idea. It's like selling paperbacks at a grocery store: people who would never think of entering a bookstore will stumble across the books while searching for something else.

(For those who are interested, the key to finding ScrollMotion e-books at the Apple app store seems to be to do a search on the word Iceberg.)

Great news, Mark. Thanks for always being on the go for us authors. That's why we all love you and send you our best thoughts all the time.
--Jake

Wow, Mark! That's FANTASTIC news! So excited about this.

Well done, Mark. Guess I'll have to get a smart phone now. lol.

This is wonderful! Thank you so much Mark! Smashwords was already amazing. Now I'm at a loss for words.

Congratulations. Really means a lot to all of us indie authors. You guys are the best.

One more big step for your Smahswords authors and publishers. Well done, Mark. Congrats from a spanish publisher.

Great news, Mark! Congratulations on this.

Excellent! This is an area where it would be very difficult (and prohibitively expensive) for authors to expand on their own. It really opens up a whole new avenue. I look forward to seeing the results!

This is good news. Thank you. Will this open the capabilities for our books? Meaning can I now place video, narration or music into my work?

Thanks for the up-date, Mark. You are doing an excellent job. I've got three more titles I'm going to be putting up on Smashwords shortly. Just a mnatter of getting them formatted. Keep up the good work.

Merry Christmas to me. Graci!

That's Great!!, I have been telling a number of people about Smashwords, I had a question will this help those on Kindles? It seems from the distribution page that books still haven't shipped to Amazon. Is it true that if they just came to Smashwords they could buy books for their Kindles? Thanks, I think you're doing a great job of getting us out there. Thanks You

This is really great news. I was wondering how to publish an app for my books and now that is case solved. Thank you Smashwords.

All we need is opportunity; thank you for supplying it.

Thanks for the enthusiastic feedback, everyone! I probably should have put in the post that we have no idea how big (or small) of a retail channel this will ultimately become. I scoured the Internet for hard numbers on the percentage of ebook sales derived by standalone book apps and no one seems to track it (maybe we'll be the first!).

Paul, yes, although we're not officially distributing to the Amazon Kindle store yet, we do support Kindle users who want to purchase directly through Smashwords.com. They download the MOBI format.

Very nice news, Mark. I'll put a post about it on the Smashwords Forum.

This is exciting news, Mark. Thank you so much! And thanks for helping me when I had problems uploading my book. Good to know you are the helm. :)

OMG, Mark! You're the best. When do you sleep? Give Lesleyann a hug so she recognizes you!

Thanks for all your tireless work.

Fantastic news! I'm so impressed with the job Smashwords has done to help authors and publishers reach readers.

That's great! Yet more platforms (like Kobo, B&N, Sony and iPad) where people will download my books if they're free but will only buy a copy every month or two!

And poof, just like that, another four (at least) markets. Seriously cool.

Thanks for all you do, Mark!

Fantastic news!! Thank you, Mark, for continually supporting your authors and helping our readership grow.

Wonderful! But could you point us to a sample app (of a free book?) once one is ready, so we can get a further sense of what we're getting? And will we be getting notifications of when our book aps are available?

So glad I chose smashwords to publish my work! Thank you, Mark, for the working so hard for all of us!

I saw some book apps in the Android market a few months ago, vaguely thought it would be a good idea to be there and then forgot. You saw the same thing and made it happen. Well done.

Smashwords rocks yet again. You have definitely found your calling, Mark Coker. Thank you for the chance to go with the best distributor in the world of e-publishing.

That's a good as it gets, Mark. Thanks for working on our behalf. I'm delighted that all my books qualified.

This is great news, Mark. I really appreciate what you do with Smashwords. Keep up the good work!

This is an amazing bit of news! Huge step forward for Smashwords!

Great news. Smashwords always seems to stay ahead of the curve.

I can't imagine reading a novel on something as small as my phone, but I'm all to happy to have others do so. Especially if it's *my* novel. ;)

I'm proud to be part of Mark's Smashwords, especially since I went into the Meatgrinder and came out alive. Can't wait to move forward from "pending approval." Meb Bryant, Harbinger of Evil

Great news- you simply CAN NOT get too much exposure!

This is indeed a milestone development. The only thing we now look forward to Smashwords is a faster approval system for the Premium Distribution. Thanks.

Smashwords is a wonderful place for us authors/publishers!

Kudos to you for making it even better!

As a new member to Smashwords, I thank you for making your empowering service for authors even better!

Fantastic! Onwards and upwards for Smashwords. Thanks for all you're doing for authors.

This is so AWESOME!!! Yet another avenue for people to find my writing. Thank you Smashwords!

Congratulations, Mark. Thank you for your enthusiasm, energy and leadership. I am so happy that I found Smashwords and published with you. You make Smashwords authors proud!

Wonderful news and thank you so much for all of your hard work and dedication to helping your authors!!
Blessings and Peace.
Lauren Zimmerman

Fantastic! I love how Smashwords continues to expand!

Iiiiiinteresting! I look forward to finding out how this works for everyone!

Great news. I too would love to see a sample book as app, to get a sense of what the final thing will look like.

Of topic a little- that 2 billion word mark has come up real fast!

Wow! This is wonderful, thank you for all your hard work.
Jewel

YESSSS!! Thank you Mark and all the Smashwords employees working so hard on all these things so we authors don't have to (Not that I would even know how to begin with something like this, eh?). This is why we love SW and Mark Coker (Well, besides the "little" fact that we are able to publish our otherwise forgotten books to the web).

congratulations mark!
(although i'd say that
scrollmotion got the
better part of the deal,
if you ask me, anyway.)

and i will add that i am
a great admirer of your
unflagging persistence
and tenacity. you are a
big champion for writers.

congratulations mark!
(although i'd say that
scrollmotion got the
better part of the deal,
if you ask me, anyway.)

and i will add that i am
a great admirer of your
unflagging persistence
and tenacity. you are a
big champion for writers.

This is such amazing news, Mark, and the best part? You GIVE it to us FREE FREE FREE. Thank you so much for working so hard to make all of OUR books a publishing success. You have to be the best distributor out there!

This is certainly the best site of its type. Well done!

This whole ebook revolution has been so exciting to me. I keep wondering what's coming next? I hope I can become acquainted with some of my fellow Smashwords travelers.
www.GuardinosWrite.com/conartist.html

What a delightful surprise Mark. I am so impressed with all that you and your partners are doing that I really do not know how to express what I feel. I believe in this win/win revolution and so proud to be apart. God bless you and all the writers on Smashwords.

GREAT results from your efforts Mark.Well deserved Imho.
RE:DOWNLOAD stats---they are for Total d/l---right? Any chance we could see the total /month stats ranking. Some shown with high d/l figures here have been available for YEARS!
Thanks in advance.

Great, well done. I am happy to be working with Smaswords and Mark!

Mark, keep up the great work. I'm very excited to be part of the ebook revolution/evolution. I don't think we'll realise until we look back just how important the current developments have been.