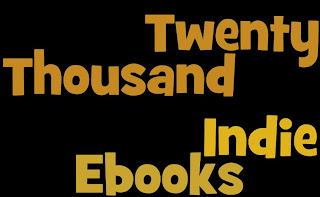 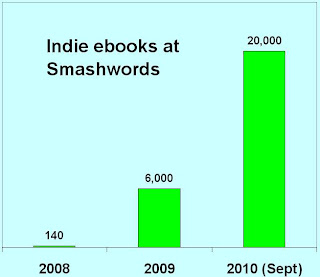 Congrats to all 8,798 pioneering Smashwords authors and publishers who inspire us every day.
Posted by Mark Coker at 7:55 PM

On the one hand, congratulations, Mark. Your site is very straight forward and easy to use. You deserve your success. On the other hand, seeing my small tomes disappear under a mass of 20,000, 25,000, soon 100's of thousands of books is a little daunting. Standing out from the crowd is getting harder and harder for those of us with few resources. Nevertheless, well done and good luck to you.

The growth is great, but as Gary points out it's getting harder and harder to stand out amidst the ever-increasing crowd.

Hi Scott and Gary, prepare for the crowd to get even bigger. The challenge of standing out isn't about how you stand out amid 20,000 or (some day) 100,000 books at Smashwords. It's how do you stand out elsewhere. The average B&N brick and mortar store probably holds 200,000 books. Amazon.com and Bn.com offer probably a million plus. There's a huge wave of additional book content coming. In my presentation at http://blog.smashwords.com/2010/07/how-indie-ebooks-will-transform-future.html I talked about all these out of print paper books that will be resurrected as ebooks. Amid the crush of new competitive content from books, you also have to compete against alternative non-book content.

In this new world of unlimited content choice, you as the publisher have unprecedented opportunity to reach readers through all these new Internet distribution points, but you also have the opportunity to get lost. Welcome to the brave new world of democratized publishing. :)

One mustn't forget that these 20,000 odd titles are vying for the attention of a market numbered in the tens of millions and growing.

Yay for as-yet-unnamed new distributor. Have to say as a romance/erotic romance writer it'd be great to get on Fictionwise if possible.

Gray and Scott - I keep hearing from authors doing this a while that building a backlist is some of your best advertising for keeping those sales coming in, so write those books!

Standing out from the crowd has, and always will be, a problem throughout the history of publishing. But there's another factor to consider as well:

Publishing with a traditional hardcover publisher got you 10-15% royalties. With a paperback publisher, that was 6-10%. With Smashwords, you get 85% (or 40-60% through their distribution partners). You can make the same amount of money selling fewer copies. That's an important point to consider.

(Plus, traditional paper publishers play all sorts of games with "reserves against returns" to withhold your money and cheat you with accounting tricks that I've seen no sign of [so far] at Smashwords.)

Thanks, Mark, I'm delighted to see my name in such fine company!

When I first joined Smashwords, as an unknown writer from a fairly obscure part of the world, I certainly didn't imagine that 18 months later I'd be looking at thousands of sales. I still have to pinch myself. :-)

I am so happy to see the success of Smashwords! More readers will be drawn to the site by this accomplishment and more readers is what I, as a writer, want to see!

Yes, it means the competition is tough, but it always is in the book world. The happy news is that there is room for all of us. Lots of readers out there, and with the competitive pricing of ebooks and the growing numbers of e-reading devices it's making the options for book lovers greater.

Congratulations and here's to much more success!

Oh, how grand!
A great thing you've helped build, Mark!
I'm happy to see my titles among the 20 thousand+ books!
Yes, it's a bit unsettling to see the competition's hand around your neck, but so has it been in publishing for decades! Print or E-ink it'll always be a struggle to be found! Just hope your name sounds better or your book cover pulls more attention (Don't think I use Paint to make my covers for my health! Colors draw you in).
Congrats, Mark, and whoever else works up in Smashwords!

This is fantastic Mark. As an enthusiastic CEO of my book, I am trying to get as much as I can out of the progress you have made on our behalf. I think I'm heading for a Podiobook next!

P.S. Well done to Shayne for making so many sales. Shayne is one of my favourite authors :)

Proud to have my titles be a part of this site as well. And not only that, it's just so refreshing to receive so much help and and blissfully direct guidance on what would otherwise be an incredibly daunting task as e-book publishing, formatting and promoting truly is.
Thanks for all you've done for us authors, Mark! Very excited to see where all this goes!

I think it's great, I appreciate how much Smashwords has done for authors — but especially for readers that benefit from all this wealth of reading material!

That 'words published' counter on the front page is turning over faster and faster.

I have a look every time I check my downloads numbers.

The billion mark is coming up very soon!