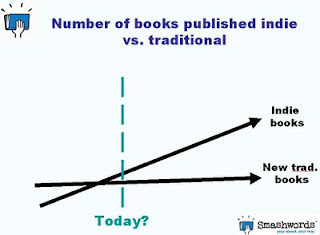 Jim Milliot over at Publisher's Weekly reported today on new data out of R.R. Bowker that shows a huge spike in the number of self-published titles in 2009.

A staggering 764,448 titles were produced in 2009 by self-publishers and micro-niche publishers, according to statistics released this morning by R.R. Bowker. The number of "nontraditional" titles dwarfed that of traditional books whose output slipped to 288,355 last year from 289,729 in 2008. Taken together, total book output rose 87% last year, to over 1 million books.

A few weeks ago, I did a presentation titled, "Bookselling on the Web" at the Booknet Technology Forum conference in Toronto, and in that presentation I discussed four big trends that will impact publishers in the years ahead.

The chart above is not meant to be numerically accurate (though based on the numbers released today, it's probably not far off). Instead, it serves as a visual representation of what I view as a larger trend where, from a sheer force of numbers perspective, self-published works will continue to swamp traditionally published works.

In the brick and mortar book store world, the numbers above have little impact, because 99.5% of these indie-published books are unlikely to receive widespread distribution in stores. That is still one huge benefit a good publisher can offer an author today that an author can't achieve on their own. If you want your book on the front table at Barnes & Noble, a big publisher has the clout to put it there.

In the online bookselling world, however, the advantage is less pronounced, because a print on demand self-pubbed title can share the same virtual shelf space as a traditionally published title. Same thing with ebooks. As any indie Smashwords author or publisher knows, our ebooks are distributed right alongside those of major publishers in ebook stores such as B&N, Sony, Kobo and Apple's iBookstore. 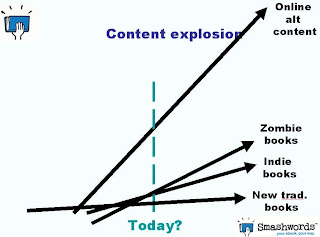 The fourth trend I presented, related to my Trend #3, I labeled, "Content Explosion."

See the slide at left. Again, it's not meant to be numerically accurate. It's more of a macro conceptual representation of where I think things stand today, and what the future will look like.

In the future I see, there will be an ever-growing explosion of content, and all this content will compete for the limited eyeshare of consumers.

Indie authors, by their sheer numbers, will swamp traditionally published authors. Zombie books (my term for books that refuse to die, such as used print books, re-issues of out-of-copyright and out of print books, both as P.O.D. books and ebooks) will compete against the new titles and backlists of indie authors and traditional publishers. And then swamping all the players, by sheer volume, is the ever-increasing amount of alternative, Web-accessible content.

How can any author or publisher compete against this flood of unlimited content choice?

My message is not doom and gloom. I think authors and publishers have more opportunity to profitably reach readers than ever before.

It all comes down to the same factor that has always governed the success or failure of any book - word of mouth.

To spark word of mouth, it starts with an incredible book presented to your first readers.

Readers will always appreciate a great read. If you write a book that incites passionate joy and appreciation in your reader, then the reader will attach your book to their virtual sleeve and will promote it to everyone they know and love.

There one big problem with my trite answer to life, the universe and everything related to publishing. The reality of the matter is that, to our readers, our books appear somewhere along a broad spectrum of perceived brilliance. On one side of the spectrum you have horrible books that would make any reader's eyes bleed. On the other side of the spectrum you have books of brilliance and resonance that will go viral.

Most of us authors fall somewhere in between. Maybe for a future post I'll explore what authors can do to catalyze their virality.
Posted by Mark Coker at 8:45 AM

More and more people are pubishing, of course, because they can. I found that out when I published "Dandy Do-Little" on Smashwords with no fuss at no cost. At first, I didn't think it mattered if anyone read it or not, I was just so happy to have published it. But now, well, I've set a sales goal of one million paid downloads, no time frame. It sounds ridiculous, but until a month or so ago the idea that "Dandy" could be available to one million people seemed ridiculous. How's it going to happen? I'm thinking about that ... but for the most part, I don't know, and isn't that the beauty of it?

I self-published my first book, Inside Out: Becoming My Own Man in 1983. Since then I have published 7 books with major publishers, including Male Menopause which became an international best-seller.

With my new book, Mr. Mean: Saving Your Relationship from the Irritable Male Syndrome, I'm going back to my roots and publishing with a micro-publisher, Numina Press, and will also publish on Smashwords.

Its a lot more fun and pays better. What's not to like?