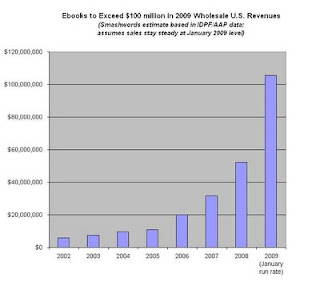 Alright folks. Turn your clocks forward. If you're waiting for ebooks to go mainstream, it may have happened already.

The IDPF reported today in an email to members (see below for snippets of the email) that wholesale ebook sales for January 2009, as reported by the American Association of Publishers, jumped 173 percent over the same period one year ago to $8.8 million. If you annualize that over 12 months, as I did at left, it means wholesale ebook sales are on track to surpass $100 million in 2009.

I'll give you a minute to lift yourself up off the floor, because I'm not done yet.

As I reported here in my previous analysis in January, the numbers are even more interesting when you dig beneath the surface. The rate of growth is accelerating. We saw some signs of this in the final months of 2008, but with January, the numbers shot through the roof. 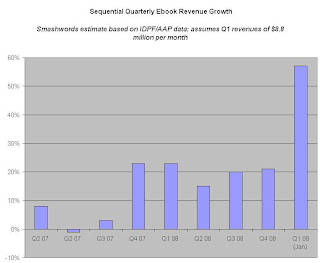 The chart at left examines the quarterly sequential revenue growth over the last two years, and by sequential I mean Q2 to Q3, Q3 to Q4, etc. This provides a measure of how one quarter relates to the quarter immediately preceding it.

When you see sequential growth accelerating, something interesting is happening, especially when the growth is accelerating off of an ever-increasing base.

For Q1 2009, I took the $8.8 million for January and assumed February and March would be the same. Based on what appears to be happening, I'm probably overly conservative. Still, the number shows an estimated 57 percent sequential increase for Q1 2009 over Q4 2008. In other words, 2009 is going to be a break out year for ebooks. 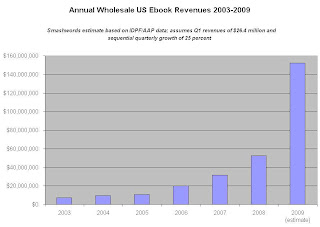 Next, I analyzed what the numbers would look like if the sequential quarterly growth rate slows to 25 percent per quarter for the rest of 2009, again assuming January 2009 is representative of where 2009 is headed (of course, there's a chance January was a wild fluke, in which case all my estimates are worth the price you paid to read them). With 25 percent quarterly sequential growth, wholesale US ebook sales will be over $150 million. And unlike paper books, these aren't books that are shipped and counted as sold before they've actually been sold through to consumers. This is actually sell-through (someone correct me if I'm wrong). If you further assume, as the IDPF notes in their email below, that retail sales are about twice wholesale sales (because the retailer marks up the price paid to the publisher), retail sales could reach $300 million for 2009.

The email from the IDPF:

eBook sales statistics for January 2009 have been released from the Association of American Publishers (AAP) who collects these statistics in conjunction with the IDPF.

Trade eBook sales were $8,800,000 for January, a very significant 173.6% increase over January 2008.
Just a reminder these are wholesale revenues reported from 13 participating Trade Publishers.

Please keep in mind the following:

You can examine the IDPF data for yourself at http://www.idpf.org/doc_library/industrystats.htm.

So what do you think, have ebooks gone mainstream? I think for authors and publishers who release in e-, ebooks have gone mainstream. Amazon reported in February that for books they sell in both e- and p-, they're deriving 10 percent of sales from e-. That's huge. It means if you offer your books in e-, readers will come. I've seen other reports of similarly large percentages from progressive publishers such as O'Reilly who are also reaping big sales increases on the e- side.

If you're an author or publisher, and your books aren't already listed on Smashwords, why not? Our 85 percent net to the author/publisher beats Amazon by a wide margin. Just sayin'.

I think this is great! There's hope for this venue of literature sales!

Another LinkedIn member posted an article that is relative to your discussion: http://blog.newfiction.com/customers-wont-pay-more-than-10-for-ebooks-not-the-same-as-paper/
So, while sales of ebooks are soaring, apparently the 'over the counter' pricing won't move.
Molly

You should contact Orson Scott Card (Ender's Game) and convince him to try and talk about Smashwords.

He thinks that Amazon is a ripoff as well . . .