The other day I was browsing the Open Directory Project and stumbled across this hilarious ebook advertisement by Biff McProfit entitled "Buy My Stupid eBook."

It's an absolutely brilliant parody of the sneaky tactics some ebook authors use to sell their books. You know those ebook ads I'm referring to - they usually promise to unlock the secret to some system that will change your life forever. Unfortunately, I suspect the only people making money off these books are the ebook authors themselves.

If anyone out there knows the real name of the writer behind this parody site, leave a note here so I can give them the credit they deserve.
Posted by Mark Coker at 5:18 PM No comments:

The greatest challenge facing most authors, whether they're traditionally published by one of the big New York houses or self-published on Smashwords, is how to market their books. Most authors are credible experts on something, yet that something is rarely marketing and public relations. But without marketing, most books will die on the vine because prospective readers will never know they exist.

Now comes a great marketing tool for authors called HARO, which stands for Help A Reporter. HARO is a free service operated by PR pro Peter Shankman that sends subscribers dozens of queries a day from reporters at newspapers, magazines, blogs and broadcast television who are seeking subject matter experts they can interview for their stories. Each query describes what the reporter is looking for and provides contact information (usually an email address) where you can direct your pitch. This morning's email included 22 queries, including some from The New York Times, The Christian Science Monitor and Fox Television.

The rules for using HARO are quite simple: No off-topic pitches, otherwise Shankman will boot you from the list.

All authors, especially non-fiction authors, would be simply FOOLISH to not subscribe to this free service.

Subscribe at http://www.helpareporter.com.
Posted by Mark Coker at 7:56 AM 4 comments: 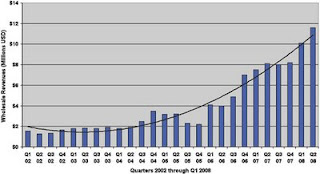 Bottom line, folks, ebook sales are accelerating in the marketplace, yet they still represent a small piece of the overall book publishing industry pie.

Some notes about the data above: 1. The data is US-only. 2. The data reflects wholesale sales as reported by 12-15 leading publishers, so actual sales figures to customers were probably approximately twice those reported here.

For self-published indie authors, the data above sends a clear message that if your book isn't available in ebook form, you could be missing out on an important sales channel. If you haven't yet published your book on Smashwords, go ahead and do it. It takes 5 minutes or less and you control all aspects of marketing, pricing and sampling.
Posted by Mark Coker at 9:36 AM No comments:

The company earns revenue through the sale of POD versions of the texts, as well as digital study aids.

Before I go on about Flat World, I should first disclose that my views about Flat World are not impartial. I'm on their advisory board and I'm an investor. The PR agency I own, Dovetail Public Relations, does PR for Flat World. So enough said about that.

Ask anyone who has been to college recently, or has paid for their kid to go to college and they'll tell you textbook prices are insane. Textbook prices have been spiraling out of control, growing faster than inflation and burdening most college students with annual costs approaching $1,000 per school year. The textbook pricing problem has reached a crisis, because it threatens to make higher education unaffordable to many students.

Some politicians have called for greater regulation of text book prices. This is tough though, because publishers' own production and marketing costs are increasing, and it's not fair to regulate an industry to zero profits.

A better solution is to recognize that the textbook publishing model as we know it is broken, and no longer serves the needs of students, educators, authors or publishers. A new approach is needed that leverages the economic efficiencies of digital production and consumption (Those of you who are fans of Smashwords know we're trying to leverage the same economic efficiencies to democratize trade book publishing, thus you'll understand why I'm so excited about Flat World's potential to change the world).

Under the Flat World model, students get free and low-cost textbooks and study aids; teachers have greater control over their curriculum by mixing and mashing the texts to suit their unique class requirements; authors get paid through the sale of POD copies and study aids; and the publisher is allowed to earn a fair profit.

Flat World Knowledge has 17 textbooks under contract and in development by top scholars and authors, and recently began limited in-class trials in a nationwide beta test at 20 colleges across the United States.

Learn more about Flat World Knowledge by visiting their site at http://www.flatworldknowledge.com.
Posted by Mark Coker at 9:12 AM No comments: