A Visit to Montserrat, One of World's Oldest Publishers 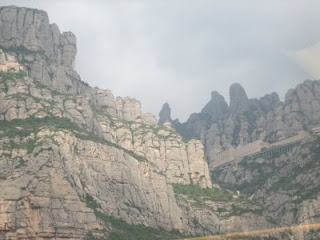 I'm in Europe for the next five weeks (thus my posting here will be sparse), and today I visited Montserrat, the breathtakingly beautiful monastery perched high atop a mountain range in the Catalonia region of Spain.

I learned today Montserrat was the world's first monastery to acquire a printing press. Wikipedia puts the actual date of that acquisition around 1499.

Keep in mind, this was a revolutionary move at the time. Many monks resisted the printing press for fear it would put them out of work.

Back in the pre-Gutenberg press days, the work of bookmaking was performed primarily by monks, who would transcribe, illustrate and reproduce texts by hand, letter by intricate letter. As one might imagine, the printing press had an enormous impact on the monastery's output. Within a short period of time, Montserrat had published thousands of books. Nevermind that when Napolean came through he set them all on fire. I assume thanks to the printing press, enough redudant copies were archived elsewhere to preserve many of them.

In modern times, many people credit pornography with fostering the development of the VCR, DVDs and the Internet. What many of us forget is that we owe a great debt of gratitude to religious publishing of the 15th and 16th centuries for pioneering the development of books as a force for literacy and as an enduring form of education, enlightenment, propaganda and entertainment.

I wonder what societal phenomena will be the driving force behind ebooks?
Posted by Mark Coker at 4:05 PM