Is Kindle Unlimited Devaluing Books? The Dark Side of Exclusivity 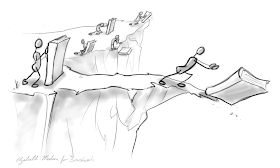 In my previous post, I examined how authors can succeed despite the challenging sales environment for ebooks.  Today, I examine how Amazon’s Kindle Unlimited could jeopardize the independence of indie authors.


Budget-minded power-readers at Amazon now have 700,000 fewer reasons to purchase indie ebooks thanks to Kindle Unlimited.  Oh, and authors earn less too.

Back in July, Amazon launched Kindle Unlimited, an ebook subscription service where for $9.99 a month, customers gain access to a catalog of over 700,000 ebooks.  Nearly all of these titles are supplied by indie authors who participate in KDP Select, Amazon’s ebook self-publishing option that requires exclusivity.

I first wrote about Kindle Unlimited here in July.  Although I'm a fan of ebook subscription services (see my two-part series analyzing the subscription business model), I concluded Kindle Unlimited was a bad deal for authors because it required exclusivity and gave Amazon free rein to control author compensation.

For the month of November, Amazon paid $1.39 for each qualifying read.  This is half of what an indie author earns when a $3.99 ebook is purchased at Amazon, or when the same book is read at KU's ebook subscription competitors, Oyster and Scribd.

Oyster and Scribd don't require exclusivity.  Oyster and Scribd pay authors off of the retail list price set by the author (Smashwords authors earn 60% list at Oyster and Scribd like any other retailer).  Amazon, by contrast, requires exclusivity (you can't sell your book anywhere else).  They pay out of a shared pool.  The size of this shared pool is determined by Amazon the month after the book is read.  It’s like Amazon sells your book today but says, “I’ll decide what I feel like paying you in a few weeks."

Many indies have announced they're abandoning KDP Select after suffering massive sales drops since July.

Authors are in a difficult spot at Amazon.  A few KU authors have publicly reported increased sales and readership, but that appears to be the exception rather than the norm.  For most KU participants, it's unclear if the promised benefits outweigh the harm of excluding the millions of readers at other retailers.  No other retailer makes authors play Russian Roulette with their books and careers like this.

KU authors have no control over their per-copy earnings because KU pays the same for a 99 cent book as a $9.99 book.  Amazon determines the value of each read, and determines how this value is shared among participating authors.

Historically, the big fear of ebook subscription services was that they’d devalue books, much in the same way some musicians (including Taylor Swift in the news recently) are concerned Spotify devalues music.  There are two elements to the devaluation concern.  The first is that subscription services might make books feel free to consumers and make them less likely to pay fair prices for other books, and the second concern is that authors will earn less for each customer interaction at the subscription service.

Oyster and Scribd proved that authors and publishers can achieve the same or higher earnings with ebook subscriptions as they earn at retail, and without exclusivity.  The Oyster and Scribd business models are author-friendly, and were the fastest growing channels in 2014 for Smashwords authors.

Kindle Unlimited, on the other hand, strips control from the author.

I think most indie ebook authors would agree that low customer prices are a generally a great thing.  It's one of the reasons indie ebooks sell so well.  Indies are pricing their professional-quality books at a fraction of the price of the books from the large publishers.

Have we come to a point where ebook retailers should display a Fair Trade Certification label so consumers know if the retailer is treating their suppliers fairly?  We've got Fair Trade coffee, why not Fair Trade ebooks?

The dark side of exclusivity

I’ve been speaking out against KDP Select exclusivity since the program first launched in December 2011.  In my first post, I cautioned that KDP Select could trap indie authors like tenant farmers tilling Amazon soil. This is happening now.

Amazon’s defenders will counter that KDP Select participation is optional and temporary, and this is true.  Authors are free to leave KDP Select after three months.  Yet this freedom is illusory.  By choosing to plant their seed exclusively at Amazon, an author must rip their seed out of other retailers' soil. They become more dependent on Amazon.

With KU, Amazon is salting the earth for authors and competing retailers.  KU devalues books, starves its competitors of the books readers want to read, exposes indies to greater risk and uncertainty, and prevents future ebook retailing options from taking root.

As Amazon’s exclusive catalog grows, and as indie authors account for an ever-greater percentage of the ebook market, ebook consumers will have fewer reasons to purchase ebooks.

Even authors who have successfully diversified their distribution outside of Amazon are affected by KU.  Why should budget-minded power-readers who love indie ebooks purchase ebooks from iBooks or Barnes & Noble when they can access nearly a million books in KU for one low price?

Indies gave KDP Select its critical mass, which means Indies created this monster. Now indies have the power to undo this before it's too late.

~
Coming up in the next two weeks, I'll do my annual predictions post for 2015 and will also do my annual Smashwords year-in-review post.  To guarantee you don't miss any future posts, subscribe to receive posts via email at the subscription link at right. It's a private list and you can opt out at any time.
Mark Coker at 2:32 PM
Share